Ten Years On: Why Sprawl Repair is even More Vital in the Age of COVID-19

Ten years since the original publication of Sprawl Repair Manual, the ideas and solutions it contains are even more urgent and needed than ever.  COVID-19 has brought the suburbs to the forefront of the conversation and made them the focus of yet another round of speculation as the next “escape grounds” from the dangers of urbanity.  The compounding global crises are upending standards and collapsing systems across industries and governance, and setting off a series of unfolding socio-economic phenomena, which require an adaptive response in urban design and development.

Why are the suburbs still so compelling following the unprecedented renaissance of many downtowns in the past two decades? As cities grow increasingly dense and expensive, more people have been relocating to the suburbs. Even before the pandemic, Millennials (the  largest  generation in the U.S. labor force) were settling down and starting families in the suburbs. Affordability, decent schools, employment opportunities, and now the pandemic-induced search for easier access to open space are among the main drivers. In fact, the suburbs represent the largest percentage of development in the U.S. for the last 70 years. Since 2010, approximately 80%  of all jobs were created in the suburbs. Tech giants are expanding to the suburbs. Apple, Tesla, Amazon and other companies have recently chosen suburbs of Austin, Texas as the site for their expansion. Even with the seemingly endless barrage of Zoom meetings, remote working and schooling, these expansions will continue.

Why do we speak of repairing the suburbs? Traditional shopping malls and big-box retail, which have characterized suburban areas in the past have  lost traction  with the rise of e-commerce – a tendency strengthened by the pandemic. They leave behind underutilized real estate and inactive commercial properties, which are suitable for adaptation for a number of reasons: first, they are accessible by thousands of households; second, they have an existing infrastructure that can be repurposed, and third, they often have large, single-ownership parcels suitable for redevelopment and infill.  Not the least of the reasons for repairing sprawl is the inherent sustainability of reinventing already-disturbed real estate rather than expanding into green space.

Which of the Sprawl Repair techniques, originally outlined in the book, remain relevant? Here are some ideas and techniques that can be useful:

Reclaiming parking lots of empty malls and shopping centers. They can be redesigned into temporary use for successional development, parks, or even local food production. This technique includes keeping some existing buildings that can be gradually replaced by new ones, but reorganizing the space in front of them into a green or a square, channeling the circulation close to the storefronts, and creating a useful civic space. 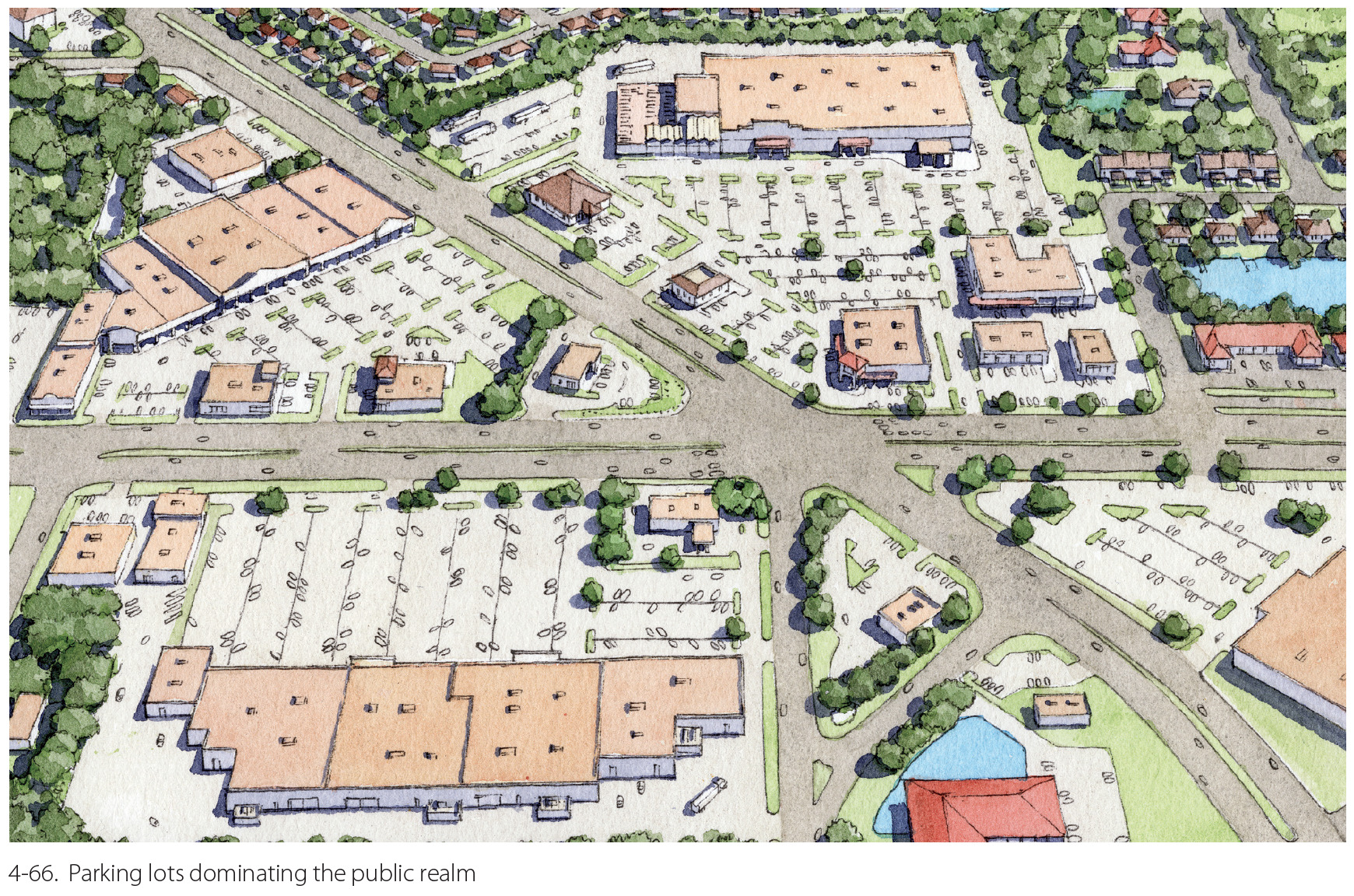 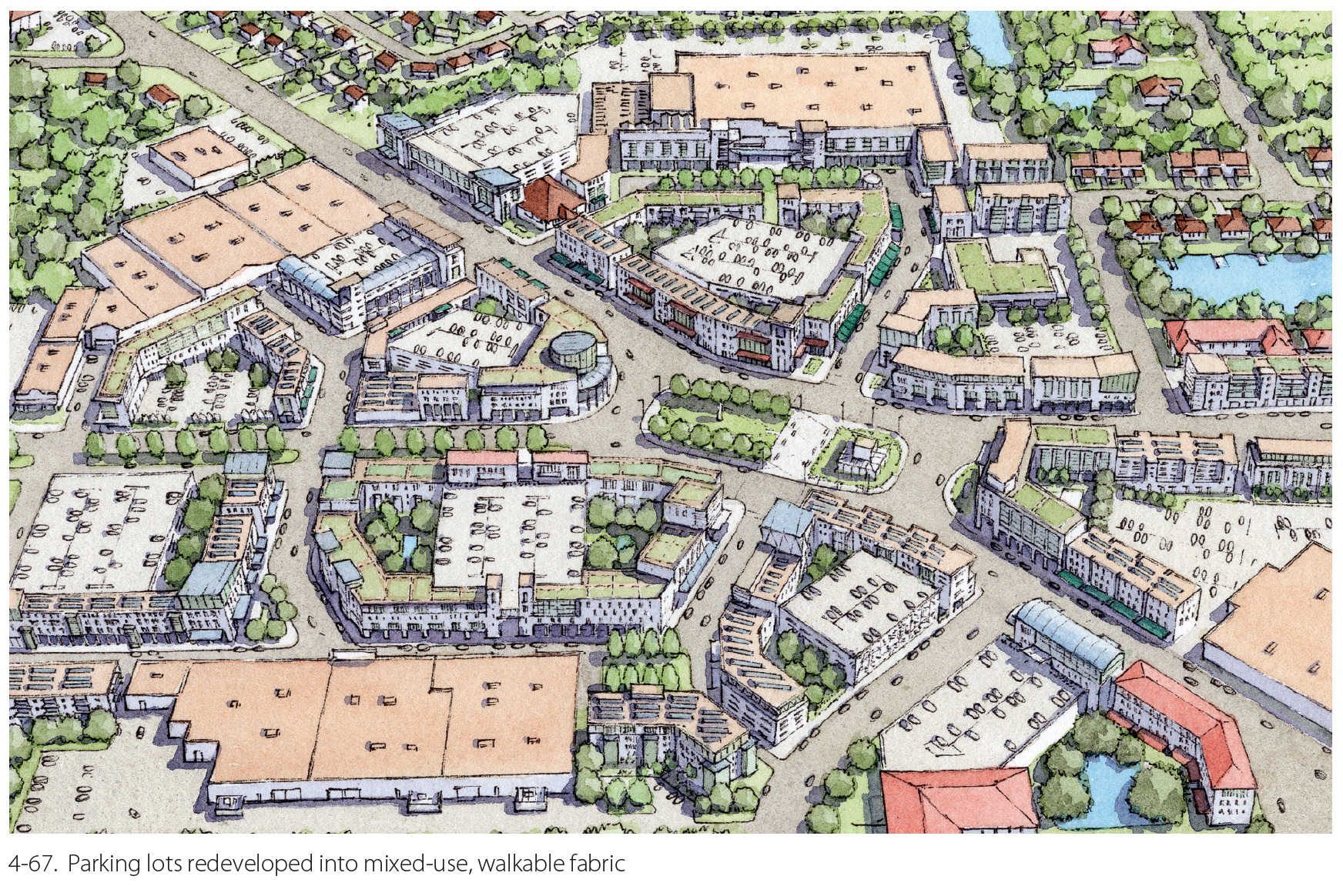 Malls and shopping centers’ existing structures can be utilized by turning them into senior and affordable housing, live/work units, educational facilities, among other uses. Other interventions are to partially or fully demolish a structure to make way for something more useful, such as a village center. The new buildings could provide for natural ventilation and daylighting, a health benefit especially during a contagion health crisis. Also, passive solar systems and gardens can be introduced on existing and new roofs. 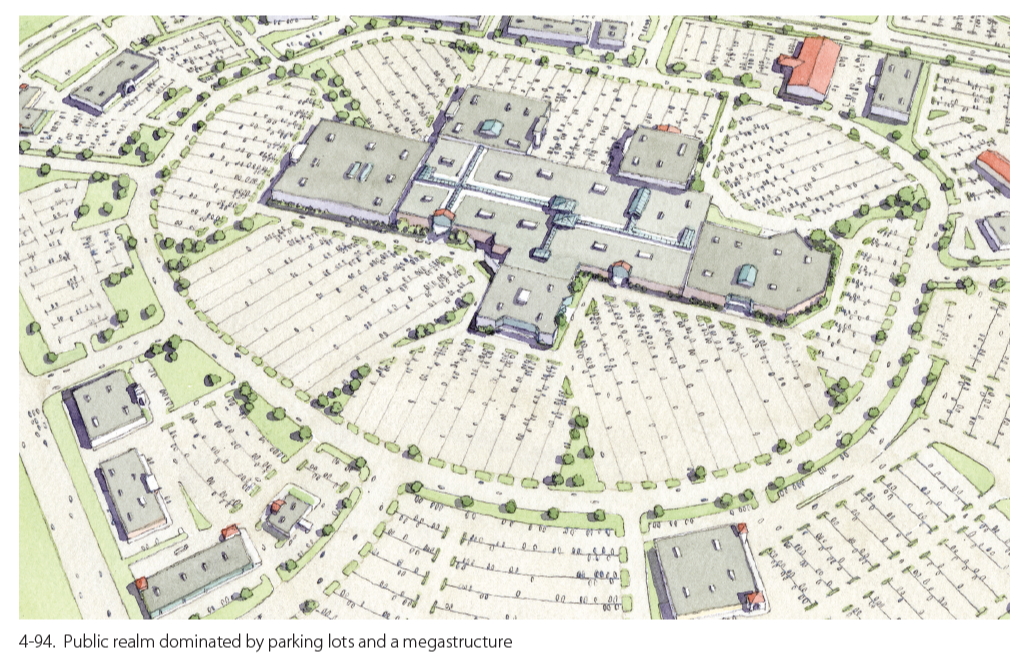 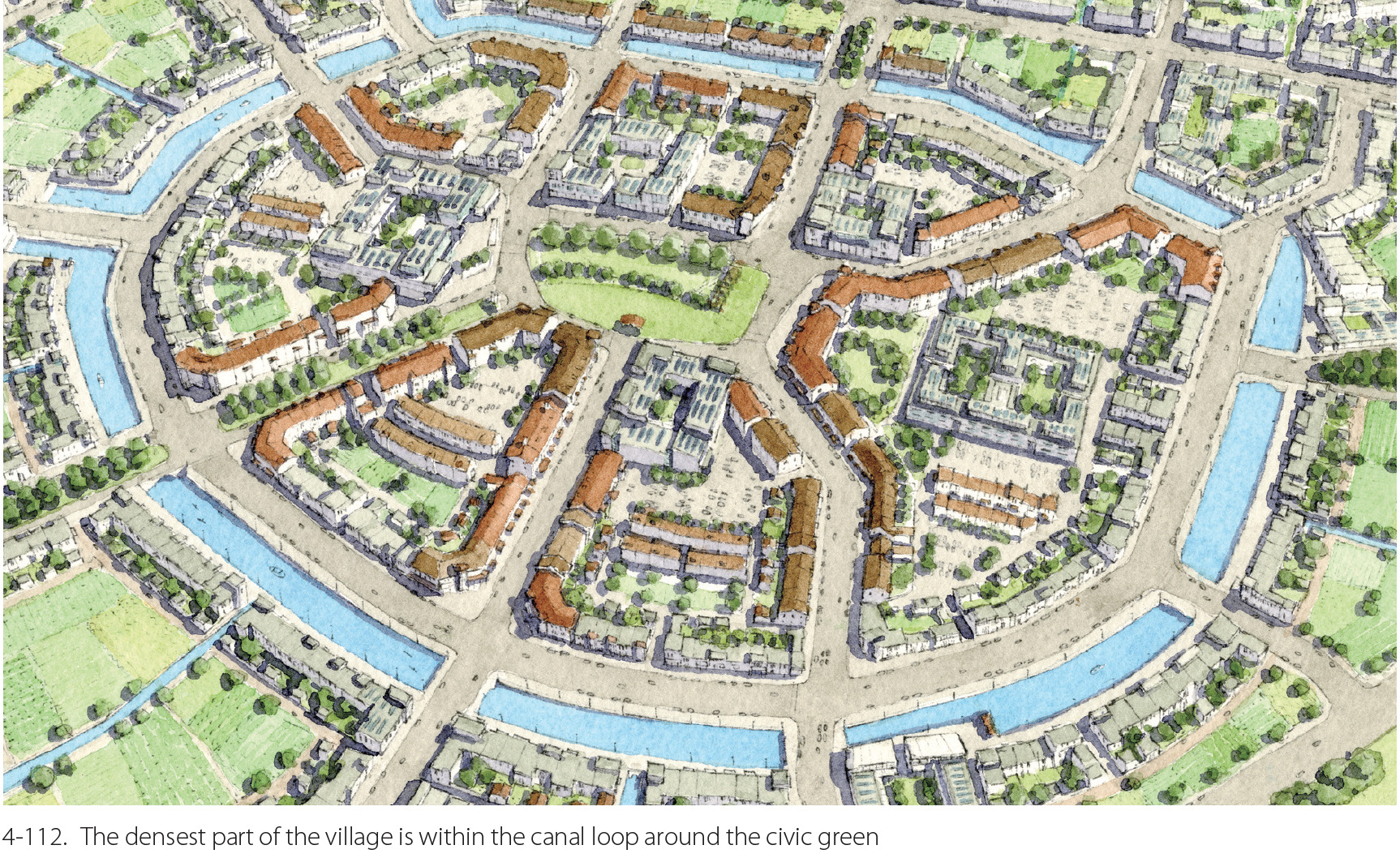 Business parks can be retrofitted to convert existing office buildings into residential uses such as lofts, as well as build a local culture of entrepreneurship and incubate small businesses. This technique creates co-working spaces in suburban office campuses to prevent driving commutes to downtowns. This will spur local commerce and help create dynamic, 24/7 communities.

Zoning codes  should be changed to allow for sprawl repair and the restructuring of stranded assets. The existing regulatory practices in many suburbs still limit the opportunities for mixed-use and retrofit. Suburbs should revisit these codes to allow for some change to take place. Introducing Lean Urbanism codes  that are less cumbersome will reduce red tape and allow for more flexibility such as ADU’s and a variety of building types in single-use suburban enclaves. 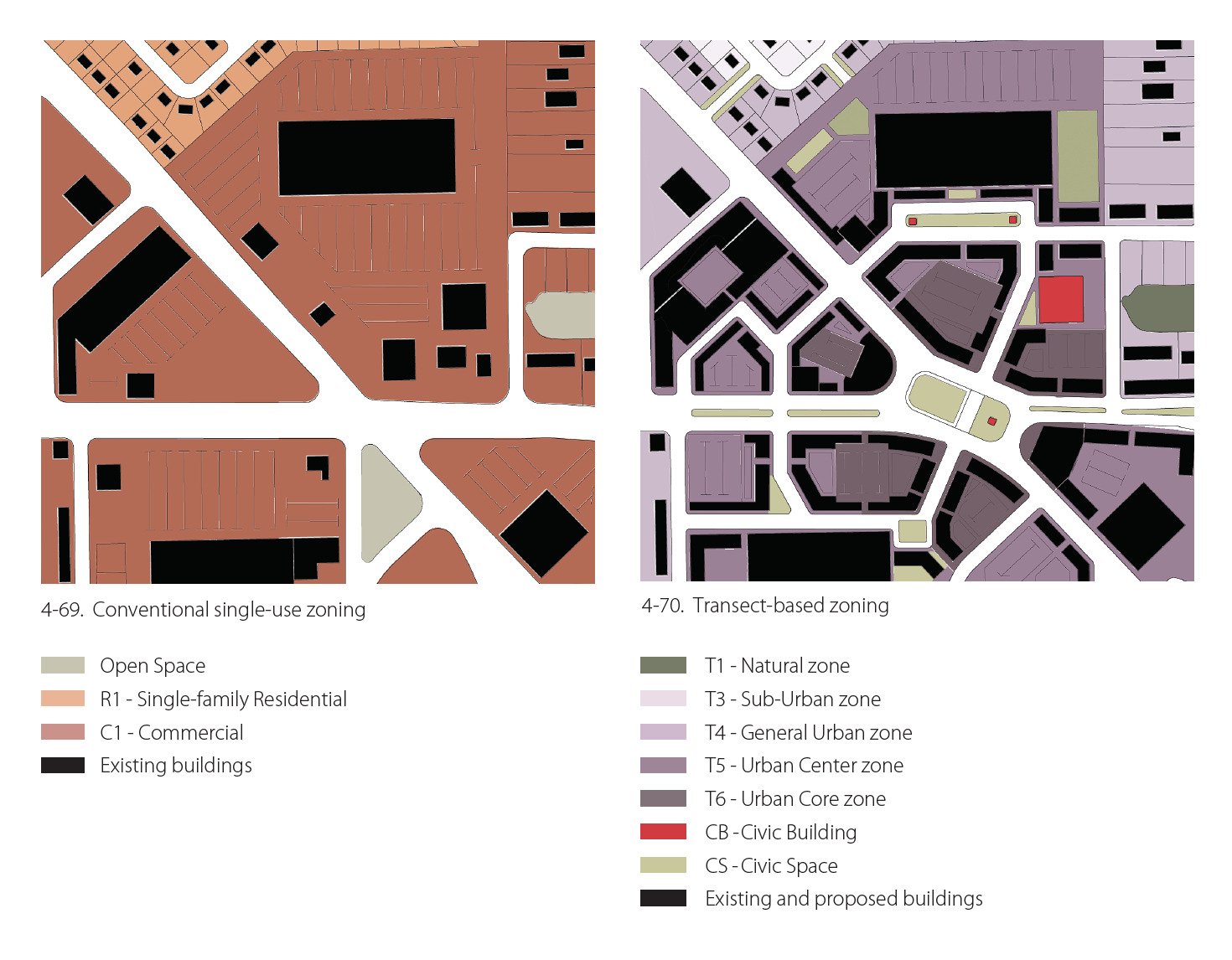 These are just some of the techniques outlined in the book, and there are others that are suited to the needs of our time, including reversing gas stations and reallocating the pattern of single-family housing. All options should be examined, as repairing and reclaiming sprawl instead of creating it anew will help revitalize the suburbs and bring economic opportunities not only to property owners, developers, and municipalities, but also to younger entrepreneurs. Existing and new residents will benefit from a blend of public spaces, and walkable mixed-use amenities not currently available in the suburbs. The Sprawl Repair Manual contains more techniques that are applicable to our current predicament.