The realities of climate change in our collective experience is inescapable; members of the Congress for the New Urbanism (CNU) continue to explore important questions about the (not-so-distant) future: Where and how will humanity live as sea levels rise and other phenomena like volatile weather, resource depletion and pollution worsen? Since these are certainties rather than merely threats, the focus turns to adaptation over prevention. For nearly thirty years, the CNU has been advocating for adaptive responses to environmental deterioration in the form of eco-friendly, people-centric, walkable communities. New urbanists have also identified retrofit or the repurposing of suburban assets to create dynamic mixed-use centers, as an effective adaptive approach to the environmental changes coming our way.

Why Adaptation in the suburbs? Sprawl contributes to climate change, with CO2 exponential increase from driving. Dense, urban cities are more vulnerable to natural disasters and less flexible for adaptation, because of large concentrations of population, high-rise construction, and complex infrastructure systems that can be easily fractured. In that sense, suburbs that can accommodate retrofit may be better positioned for adaptation.

What is retrofit, also known as sprawl repair, and when did suburbia become popular again? Sprawl Repair is a method of transforming auto-centric places into more complete, mixed-use, less car-dependent communities. As cities grow increasingly dense and expensive, more people are relocating to the suburbs. Millennials, the largest generation in the U.S. labor force, are settling down and starting families in the suburbs. Affordability, decent schools, and employment opportunities are among the main drivers. In fact, the suburbs represent the largest percentage of development in the U.S. for the last 70 years. Since 2010, approximately 80% of all jobs have been created in the suburbs. Even tech giants are expanding to the suburbs. Apple recently chose a suburb of Austin, Texas, as the site for its new headquarters.

By 2050, the U.S. will grow by an additional 100 million people. The urban centers and even the first ring of suburbs will not be able to house everyone. The redevelopment of the second and third generations of suburbs will be imperative. The retrofitting of suburbia ensures that the next generation has more sustainable and desirable places to live in the coming decades.

Traditional shopping malls and big-box retail that have characterized suburban areas in the past have lost traction with the rise of e-commerce or have simply not remained current. Either way, they leave behind underutilized real estate and inactive commercial properties, which can be repurposed to create much needed urban centers within suburban municipalities. This is already happening. New urbanists are redeveloping parking lots of active malls to revitalize malls and towns. A developer in Columbus, Ohio, is investing $500 million dollars to expand an existing lifestyle center into a town where people can live, work, and enjoy bars and restaurants – experiences that traditionally motivated people to move to cities.

Suburban areas are suitable for adaptation for a number of reasons: they have an existing infrastructure that can be repurposed, they are geographically accessible, and they may have large parcels of land for local food production. When these suburbs are situated on high ground away from rising sea levels, they become ideal locations for adaptation. We should focus our efforts on intensifying adaptation in suburban places with existing infrastructure in these six ways: 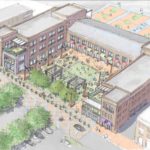 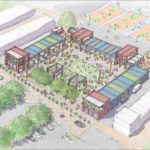 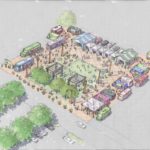 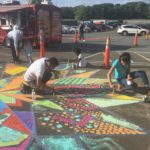 Again, there are few, if any, alternatives to the need for adaptation. Even if humanity were to stop all carbon dioxide emissions in this moment, the carbon dioxide levels on the planet would still increase. The best we can do at this point is to focus our efforts on adapting to a new world. Repairing and reclaiming sprawl, instead of creating it anew, may be our best bet at survival. It will take urban planners working in co-operation with suburban leaders and residents to help us meaningfully prepare for the coming challenges. Only then will we have the chance to survive, and maybe even thrive.