Royal Advocate for the Natural and Built World

DPZ’s connection with Britain’s new king began when the Prince of Wales mentioned Seaside in his 1988 book and documentary, A Vision of Britain, praising its sociable, interconnected plan and walkable urban scale. He made his vision a reality in 1989 when he commissioned the plan for the village of Poundbury – an extension of Dorchester – on land owned by his Duchy of Cornwall.

The master plan was drawn by Leon Krier and DPZ was subsequently engaged to draft a model urban code for the first phase. Since construction began in 1993, Poundbury has been a testament to Charles’ commitment to traditional town planning principles and classical architecture as viable tools with which to craft real 21st century communities.

Despite the constant barrage of criticism from the modern architectural media for what it derided as historicist aesthetics, the success of Poundbury has been undeniable. Though not yet complete, today it is a truly mixed-use community. Home to 4600 residents and employing 2400 workers, Poundbury features a broad range of housing where a third is considered affordable or low-cost.

Charles’ support for New Urbanism has inspired numerous traditional new towns across the UK, including two in Scotland that were master planned by DPZ. Tornagrain in Inverness, and Chapelton of Elsick in Aberdeenshire are emblematic of the Scottish government’s support for sustainable urban growth patterns in the form of complete towns and villages. These two projects are illustrative of the goal the King once ascribed to Poundbury, “this should not be yet another soulless housing estate with a business park tacked on.”

In addition to its sponsorship of beautiful and well-organized settlements, The Prince’s Foundation has also long been engaged in enabling solutions to difficult urban situations. DPZ has been fortunate to participate in two such projects, both located in the Americas.

When an earthquake rocked Haiti in 2010, the Haitian government commissioned The Prince’s Foundation and DPZ to develop the Plan Centreville to reconstruct the historic city of Port-au-Prince with a better urban environment than existed prior to the devastating earthquake. The plan envisioned a rebuilt government center around the presidential palace and an array of civic buildings and formal spaces. A form-based code ensured that new buildings were designed with pedestrian-friendly frontages. A signature feature of the plan was a flexible block redevelopment strategy offering a range of options for each location that accommodated varying degrees of property owner collaboration and municipal infrastructure restoration.

To help address the dire needs of Rose Town, an inner-city neighborhood in Kingston, Jamaica, The Prince’s Foundation lent its support to assist a community plagued by unemployment, political gang violence, and the demolition of Rose Town’s center. A DPZ charrette team engaged the community stakeholders to design new housing types, create a neighborhood master plan and generate proposals to knit together the then-disjointed urban environment. The intention was to blend a finer grain of new, one-story housing into the existing urban fabric and offer a stark contrast to the larger and socially isolating apartment block-style housing projects recently built in the area.

It is worth noting that the former Prince of Wales’ interests in the environment and how land is preserved, farmed, and built upon date well before such issues were in the mainstream conversation. Upon becoming the Prince of Wales in 1969, the then 20-yr old wrote a letter to the Prime Minister expressing concern for the decline in the salmon population in Scottish rivers. In 2011, Charles’ concerns for sustainable agriculture and local food production, and his interest in “improving people’s health, well-being and happiness” through the built environment, intersected. That year The Prince’s Foundation published Andres Duany’s Garden Cities: Theory & Practice of Agrarian Urbanism. 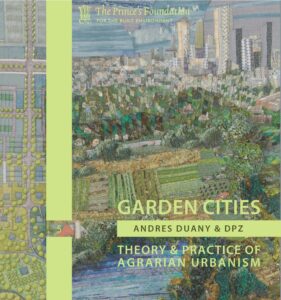 While the legacy of his work will no doubt be discussed throughout his reign, Charles’ support of past initiatives was expected to no longer be voiced publicly. However, early reports from the BBC indicate that at least on the subject of global warming he will not remain silent. Indeed, at the COP26 Global Climate Summit in Glasgow last year, he delivered a speech at the opening ceremony that stressed how the salvation of the planet depended on mutual collaboration by the world’s leaders. It is DPZ’s hope that his royal support of best urban development practices will also continue. 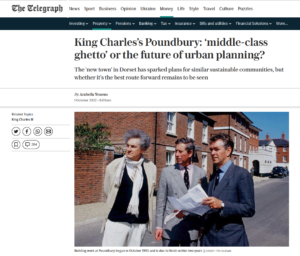 Upon Charles’ accession to the throne, several news outlets have touched upon his interests in the natural and built environment with mentions of the continued influence of DPZ and New Urbanism in the UK. The following links represent a sampling of the many articles: